Who are The Fallows and how would you describe your sound?

The Fallows are 5 mates from Coventry originally but now scattered between Coventry, London and Kettering. We play folky/indie music with a celtic influence, we’re usually pigeon holed as a dirty Irish Mumford and Sons.

When and how did the band form?

The band was originally just a 2 man project when Ross and Pete started working together and has developed with the introduction of Sam on Bass and Neal on Fiddle. The lineup was completed in February this year with Ciaran on Drums.

Whats the story behind the band name?

What are the influences of the band?

It may be clichéd but we influence each other, the band brings their own influence to the table as individuals and it moulds us into what we have become.

Our fiddle player Neal was recently a finalist at the BBC folk awards and has an amazing classically trained talent which influences all of us, it’s rare that during our performance of ‘Run Chicken Run’ you don’t see Ciaran grinning ear to ear when him and Neal go off on one. Speaking of which you only need to hear Ciaran soundcheck to hear the massive influence of drumming greats like John Bonham and Keith Moon, odd for a folk band you may think but it gives the songs such drive and dynamic we wouldn’t have it any other way. Ross, like Ciaran and Neal was raised on Irish traditional folk music and as such grew up with The Dubliners, The Fureys, The Wolfe Tones and The Pogues on the radio which gives us our Celtic edge.

One of our favourite reviews was following a gig being referred to as ‘Mumford and Sons getting the sh*t beat out of them by The Pogues armed with hurley sticks’ Not an accurate description as Ross sounds nothing like Shane but we can see what they were getting at!

What would you say have been the highlights for the band so far?

Finishing our latest album Liars and Kings is a big highlight for us, this summer has been amazing for festivals including Strawberry Fields, Off the Tracks and Godiva. Especially Godiva, there’s nothing better than a home crowd especially given the feedback we got following the gig; unfortunately we had to go on relatively early as we had another festival commitment in Leicestershire late afternoon.

You have just released ‘Liars and Kings’, where do you usually gather songwriting inspiration? What is your usual songwriting process?

The material on Liars and Kings comes from all over the place, Ross is very lyrical and you only need to listen to ‘Kerry Girl’ to realise he creates songs based on what he sees/hears/feels in day to day life. This is the first time Ciaran has worked with us, as a result you can hear the drive compared to the material in ‘Face the Wolves’ (our debut album), you would think coming from a band without drums it would be easy to revert back to our old line up to do acoustic gigs etc but it’s not until we tried to perform a song like ‘Red’ to see what a dynamic edge Ciaran brings to the band and the rest of us mould to that.

In terms of the process like a lot of bands we write as a band; get together in a rehearsal space and work out the songs, in some cases it starts with a guitar riff and a basic melody and we simply work from there, or it can come from a jam. Getting a drummer in with the purpose of recording the album meant that we were working with the exclusive purpose of writing an album, now that we have the summer out of the way we can look at getting together and writing again.

Where can we catch you gigging next?

We’re at are playing the Coventry launch of ‘Panic’ at The Squirrel on November 16th, a little later than we hoped but should be a great night.

Do you have any amusing band stories you can share with us? 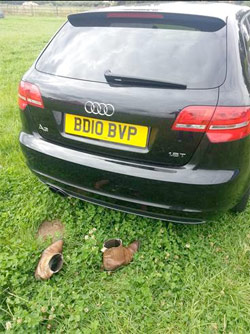 None that can be broadcast where kids can read them….. in all seriousness we spend most of our time together laughing, hard to find a specific time although at Strawberry Fields we woke up in our tents the night after playing (ross had disappeared in the night on a drunken mission to create carnage) we were all puzzled as to where he ended up and then Ciaran looked over at his car to see this…..

Where can people get hold of your music?

For Digital from I-Tunes, Amazon or for a physical copy go to 4Real Records website, we’ll also have albums for sale at gigs.

Even if it’s not to see us, if you’re reading this and you’ve never seen a local band or spend your Saturday nights in front of the telly watching X factor. Do yourself a favour go out to one of your citys venues and watch a night of live music, even if its only once a month. There’s no point in moaning about the charts being filled with one direction and jesse j if you’re not going to go out and support your local music.